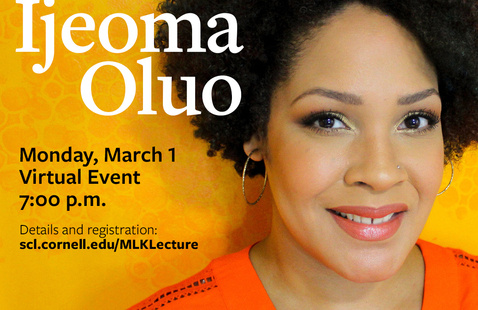 As we commemorate the legacy of Dr. Martin Luther King, Jr., join Cornell University  in a conversation with Ijeoma Oluo as we explore racism in the U.S. and consider how to engage in productive anti-racist action. The conversation will be led by Edward Baptist, professor of history. Q&A to follow.

Ijeoma Oluo is a Seattle-based Writer, Speaker and Internet Yeller. Her work on social issues such as race and gender has been published in The Guardian, The Stranger, Washington Post, ELLE magazine, NBC News and more. Her NYT bestselling first book, So You Want to Talk About Race, was released January 2018 with Seal Press. Her most recent book, Mediocre: The Dangerous Legacy of White Male America, was released in 2020.  Open to all members of Cornell and the surrounding community.

This event will be live-captioned and recorded. Register today!

To learn more about Ijeoma Oluo and her best-selling book So You Want to Talk about Race, please visit this library guide compiled by the John Henrik Clarke Africana Library and the Tompkins County Public Library.