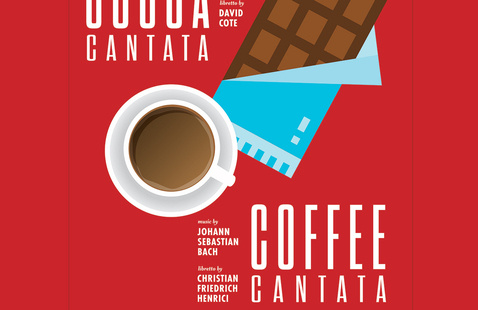 Cocoa Cantata is a response to J.S. Bach’s Coffee Cantata (c. 1734). A mini-drama with sparkling roles for soprano, baritone, and bass-baritone, the new work explores power and ethics in the multibillion-dollar chocolate industry, using Bach’s instrumentation.

Two chocolate executives, one from a global brand, the other a boutique chocolatier, square off over a hostile takeover, when a food scientist introduces a scientifically engineered supercocoa. One bite of it, and each chocolate executive is transformed.

Like the Bach, Cocoa Cantata will run approximately 25 minutes, with soaring arias, spiky duets, and a rousing final trio. The tone is gently satirical, with contemporary allusions to fair-trade practices, the chemistry and symbolism of chocolate, and the marketing of pleasure.

Cocoa Cantata will be delicious to anyone who loves chocolate—or tries to control their craving for it!

Cocoa Cantata was commissioned by Triphammer Arts Inc. with The Arts at Grace and Society for New Music.

Paterson and Cote will also premiere their contemporary adaptation of J.S. Bach’s Coffee Cantata. More than just an English version of the German libretto by Christian Friedrich Henrici, this new work aims for a “fresh-brewed” vision of the father-daughter conflict over java.

Despite references to SUVs, smartphones, and throuples, Cote’s new libretto retains the essential plot: a frustrated father tries to convince his coffee-chugging daughter to forsake the bean. When the father dangles marriage as a bargaining tool, they reach a decaffeinated détente.

Paterson’s transcription updates Bach's original Baroque ensemble to a similar, yet more contemporary classical instrumentation, consisting of flute, string quartet, and piano, and with the tenor and baritone roles switched to baritone and bass baritone, respectively. This instrumentation is also used for Cocoa Cantata.

Just as cappuccino and bonbons go together nicely, the new Cocoa Cantata and Coffee Cantata will make for a highly stimulating evening of witty words and beautiful music.