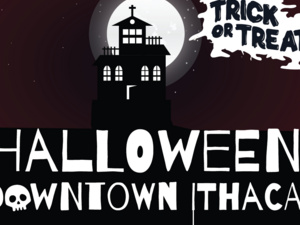 Dress up in costume and join in the fun!

The parade will start from the Greater Ithaca Activities Center (GIAC) at 4:00pm and makes its way onto the Ithaca Commons.

Trick-or-Treating and Halloween festivities will run 4:00 - 6:00PM. Stores participating in the festivities will have a "Trick-or-Treat" sign prominently displayed in their storefront window indicating that the store is greeting trick-or-treaters. Stores participating are located on the Commons, Aurora Street, Cayuga Street and inside Dewitt Mall.

Inside shops all over Downtown Ithaca