It's All Right to Be Woman Theatre - Screening & Talkback

By Tompkins Center for History and Culture 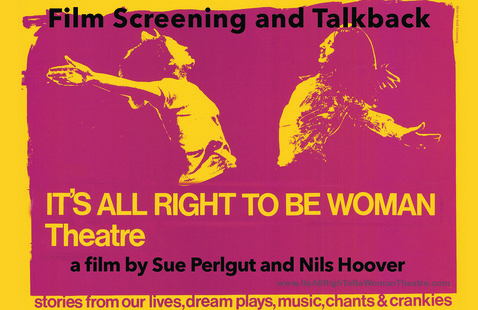 It's All Right to Be Woman Theatre

Performers, Pioneers, Activists, and Creators from 1970 - 1976 It's All Right To Be Woman Theater inspired audiences as they performed in non-traditional performance spaces in New York City, and traveled to women’s centers, colleges and universities and were seen on PBS. The Documentary by Sue Perlgut and Nils Hoover will be shown at a community screening on Sunday, January 22, 1:30 PM At the Tompkins Center for History and Culture on the Commons, 110 N. Tioga Street, Ithaca, NY. Cornell Professor Dr. Sara Warner will lead a talkback with the filmmakers. The troupe founded by Sue Perlgut, Ithaca resident for 39 years, and NYC theatre artist Lynn Laredo, created fresh and innovative forms of expression based on stories from their lives, at a time when women were beginning to break free from the roles that had traditionally defined them. These eleven women not only developed a new style of experimental theater, but they also contributed to the movement that is now known as Second Wave Feminism. They were seen by thousands of women and men who laughed and cried with them and embraced their message. For more information about them follow https://www.facebook.com/ItsAllRightToBeWomanTheatre

Due to covid-19 there will be a audience capacity for the in-person event. Pre-registration is not required. All audience members and panel speakers will wear masks for the entire program. Learn more at thehistorycenter.net/health

The documentary shows a vitally needed picture of the times now being addressed in the historical record. The troupe’s creation shaped the lives they lived and leaves a legacy for future generations that persists to this day. We are pleased to have, on video two of the troupe’s performances, one that was taped by channel 13 in New York City in 1972 and the final performance, also taped in New York City in 1975 by a woman’s video collective. Using these performances as the base of the documentary we show the power of the troupe’s work. Members’ interviews from a 2007 reunion in NYC, combined with the archival footage of their performances, still photographs, music, posters, and interviews with followers of the troupe tell the collective’s story. The troupe inspired an entire generation of women in NYC and across the country, both individually and theatrically

Sue Perlgut formed CloseToHome Productions to reach a wide-ranging audience with videos that feature topical and socially relevant issues. In 2012 she added production of theatre and other events to her mission. This is her third documentary with filmmaker and Ithaca native Nils Hoover. For more information www.CloseToHomeProductions.com

About The History Center in Tompkins County:

The History Center in Tompkins County is a generation-to-generation education and research center focused on engaging the public with the history of Tompkins County (located in the ancestral and contemporary lands of the Gayogo̱hó:nǫ' Nation) and the Finger Lakes region. The History Center helps people use the tools of history to understand the past, gain perspective on the present, and play an informed role in shaping the future.

This film screening is offered in collaboration as part of the "Breaking Barriers: Women's Lives & Livelihoods" exhibit on display at The History Center July 2021-March 2022. Learn more at thehistorycenter.net/breaking-barriers or follow @TompkinsHistory on any platform.

Tompkins Center for History and Culture