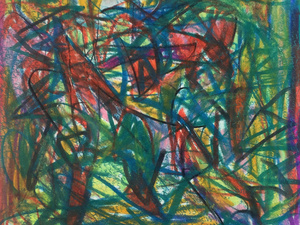 Clarity through Chaos is an exhibit  of solarplate etchings and monotypes concerned with repetitive mark making. Justin uses numbers and equations and occasionally words in his prints. He believes the fickleness or ephemeral quality of the image lends to the recording of life’s timetable. When preparing his solarplates he will draw into and scratch away at them using a variety of tools, including sticks, twigs, chopsticks, pencils, and rags, before processing the plates in the sun or under a light box. This two month show was awarded to Justin as a prize won through the first juried Solarplate Triennial Exhibit in 2019.