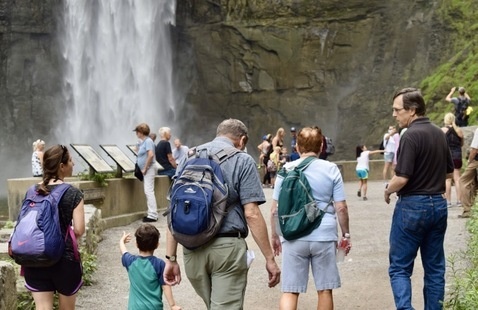 Join us for our annual James Potorti Museum of the Earth/State Parks Gorge Walks on Fridays in August. PRI has been offering this series of free Friday-morning interpretive walks in partnership with the Finger Lakes State Parks for more than 15 years.

The walks were officially named in 2004 in memory of Ithaca native James E. Potorti, who died in the September 11, 2001 attacks. The renaming of the walks was a result of an endowment gift to the Museum from his widow, Nikki Stern, Executive Director of Families of September 11. Potorti was a vice president at Marsh & McLennan, a financial services company, and worked on the 94th floor of 1 World Trade Center. His first career, however, was as a geologist with the U.S. Geological Survey. He grew up in Ithaca and attended SUNY Oswego.

The Finger Lakes region has an outstanding geological record exposed in the local gorges. These guided walks will introduce major concepts about geology and geologic time, allowing one to interpret the geological history of the region while enjoying the beauty of our local area.

August 5, Watkins Glen State Park: Meet at the main (lower) entrance, at the end of the parking lot near the trail.

August 12, Taughannock Falls State Park: Meet at the Lower Falls (along Rt 89), in the parking lot near the start of the trails.

August 19, Robert H. Treman State Park: Meet at Upper Treman Park, at the end of the parking lot of near the start of the trails.

* Please note that while the walks are free, there is a parking charge for the State Parks.