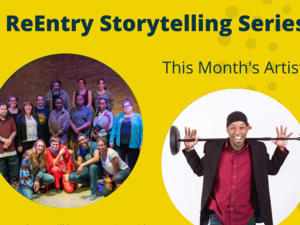 Civic Ensemble's ReEntry Theatre Program is hosting a free Storytelling Workshop Series for people who have been court involved. We'll be exploring new theatrical ways of telling our stories every 4th Monday of the month from 10:30am - 12pm. Anyone who has experienced incarceration or has been court involved is welcome and no experience is necessary!

This month, on Monday, November 23rd, we'll be exploring comedy with local artist Kenneth McLaurin! In this workshop, we will cover the basics of storytelling, joke writing, and performing. We'll explore what makes us laugh, why jokes work, basic joke structure, storytelling and joke writing techniques, and basic techniques to maintain audience engagement. Call or Text (607)-241-0195 OR Email info@civicensemble.org for the zoom link

North Carolina native, Kenneth, has long called himself, "The Funniest Person You've Never Heard Of." But his first album, Cuttin Up Comedy at the Shop, his Kitchen Theatre show Southern Fried Ithaca,  Comedy on The Commons, his recent production “So You Think You’re Anti-Racist Competition, and being named Ithaca’s Best Comedian is rapidly changing that.  He has written plays for the One Minute Play Festivals at the Kitchen Theatre.  His project 10 Short Films About Race was featured as a part of the Spring Writes Literary Festival and is scheduled for production once we are out of the pandemic.  Currently, Kenneth and his wife SingTrece are producing and performing their own micro musical Singing Notes and Slinging Jokes.  "Life's a joke, find the funny" is his life's motto, and all that knows him will tell you Kenneth, has certainly found it.  Witty, Clever, Insightful, sometimes Shocking, but always Funny is what you get with Kenneth.