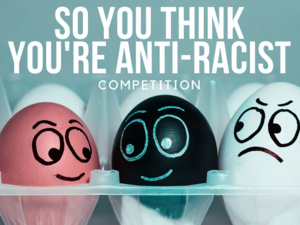 So You Think You're Anti-Racist Competition

This year, the Comedy on The Commons brings to you the "So You Think You're Anti-Racist Competition".   An exciting program showcasing the best of the best of Ithaca’s aspiring Anti-Racists.

The finals will be held in front of a live audience and broadcast via YouTube and social media.  The top 5 Anti-Racist Ithacans will battle against each other over four rounds to decide Ithaca’s most Anti-Racist!  Judging will be done by three local celebrities.  Contestants will be given a score from 1 to 10 based on creativity, effectiveness, and soul.

The viewing audience will also be able to vote for their favorite Anti-Racist Ithacan via web and mobile apps.  Join us for a fun evening of Anti-Racists activities and fun!  The event is free, but we are accepting donations and reparation payments.  Get your tickets now, and we will see you there.

Do You Want to Compete?

If you answered yes to any of the questions this competition is for you.  Register now.

You're not going yet!